While we here at Veteran Housing Network pride ourselves on bringing you the most up to date and current content regarding using your VA Loan and Veteran and military housing options and education, we thought you may enjoy a sampling of Haunted Houses to celebrate the beginning of the Halloween week.  Whether or not you believe in the hauntings, I am certain you will enjoy the stories!  Travel and Leisure did a great job of putting the list together and we hope you enjoy it as much as we did! Back in 1852, James “Yankee Jim” Robinson was hung by his neck for the crime of grand larceny. A few years later, Thomas and Anna Whaley built a house on the spot where Robinson died, and soon enough, Yankee Jim’s ghost showed up, haunting the site. It's said that his footsteps can be heard clumping around the house.

Yankee Jim isn’t the only specter, though — both Mr. and Mrs. Whaley, a young girl, and even the family dog have been known to make appearances from beyond the grave. The house is so thoroughly spooky that, according to TIME, in the 1960s, the U.S. Commerce Department classified the Whaley House as haunted. The Whaley House Museum is currently closed due to COVID-19 — check the website for updates. New York’s Greenwich Village has some of the most desirable real estate in the world — save for one brownstone on West 10th Street. Known as “The House of Death,” the townhouse is said to be haunted by the ghosts of 22 people who lived or died within its walls, including that of a 6-year-old girl who was beaten to death by her adopted father.

Being New York City, however, the house has a celebrity pedigree, too. It’s said that author Mark Twain stayed in the house back in 1900 and returns for the occasional visit.

The house’s haunted history is documented in author Jan Bryant Bartell’s “Spindrift: Spray from a Psychic Sea,” which recounts her experiences living in the building’s top floor apartment. The building houses private apartments, so you won't be able to tour the interior, but this street is a popular stop on New York City ghost tours. According to legend, the rambling Victorian mansion that sits on a busy street in San Jose, California, is haunted by the ghosts of everyone killed by a Winchester rifle. That’s undoubtedly a lot of spirits, and in order to appease them, the house’s owner, Sarah Winchester, the heir to the Winchester rifle fortune (and the founder’s widow), added room after room to the house to add more space for the dead.

Winchester didn’t simply add rooms, though, she created a labyrinth filled with halls that lead nowhere, cut-off staircases, sloping floors, and a rabbit warren of chambers. According to ABC News, the house has “10,000 windows, 2,000 doors, 47 fireplaces, 40 staircases, 13 bathrooms, and nine kitchens.” Since Winchester died in 1922, the home has hosted tours for those willing to walk among the Winchester ghosts.

For those looking for a less spooky reason behind the house’s mysterious design, the podcast 99% Invisible posited the theory that Winchester simply loved architecture and had more and more rooms added without tearing others down first.

Tours of the house are temporarily suspended due to the pandemic, but guests can still visit the grounds. Back in 1892, Andrew and Abby Borden were found dead — killed by an axe-wielding psychopath. The police’s No. 1 suspect was Andrew’s daughter, Lizzie. Lizzie stood trial for the crimes and was ultimately acquitted, but she spent the rest of her life under the shadow of guilt.

She is now said to haunt the Fall River, Massachusetts home where her father and stepmother were murdered, and her ghost is said to laugh at the top of the home’s stairs. The house is now a museum and bed and breakfast (outfitted with ghost cams), where stalwart guests can spend the night listening for Lizzie’s ghost, those of her murdered parents, or the echoes of the maid’s screams after she found the dead in their beds.

The home is open, but guests coming from certain states must adhere to the current Massachusetts travel order.

The small Iowa town of Villisca (population of around 1,252) doesn’t have much to offer tourists, except for a night of terror at the Villisca Axe Murder House. Back in 1912, the white-wood framed house was the site of a horrifying crime that left an entire family, including their four children and their two young friends, dead by axe.

There were several suspects, including an Iowa state senator, but no one was ever charged with the bloody crime. Over 100 years later, their ghosts are said to remain in the house, yearning for justice. Visitors eager for a taste of the supernatural can book tours of the site, while the bravest can spend the night and see what goes bump.

The house is currently open with health and safety measures in place. In the early 1800s, John Bell bought a tract of farm land along Tennessee’s Red River. Bell and his family thrived on the farm until they started to see strange looking animals around the property, most notably a dog with a rabbit’s head.

From that point on, the family was beset upon by unseen forces, largely targeted at Bell and his daughter Betsy. They experienced physical attacks, heard unexplained noises, and even spoke with the “entity,” who, in at least one account, identified herself as the Bell’s former neighbor, Kate Batts, who was exacting revenge from beyond the grave for some unknown slight.

The entity is rumored to have prevented Betsy’s marriage to a local boy and is believed to have killed John. According to one Bell Witch website, the haunting is backed by plenty of evidence, including “eyewitness accounts, affidavits, and manuscripts penned by those who experienced the haunting first hand.”

The farm and cave are currently closed due to the pandemic — check the website for updates. The White House may be home to the president, but it is also rumored to house many illustrious ghosts within its storied walls. President Ronald Reagan reportedly entertained dinner party guests with stories of his dog barking at invisible specters and his daughter, Maureen, waking to a transparent figure looking out the window of the Lincoln Bedroom. It may have been President Lincoln himself, returning to his former home in the hopes of reuniting with his wife or son. British Prime Minister Winston Churchill reportedly encountered Lincoln’s ghost too, while he was stepping out of the bathtub.

Lincoln and his wife, Mary Todd, held seances in the White House, according to Mental Floss, in hopes of contacting their son, Willie, who died of typhoid, presumably from contaminated water pumped into the White House. They never contacted their son, but they did claim to get in touch with President Andrew Jackson, who was loitering in his former bedroom.

According to the The White House Historical Association, President William Henry Harrison, the first president to die in the White House, continues his stay there. It’s not just former presidents who haunt the halls of the highest office in the U.S. — Dolley Madison, wife of President James Madison, is said to visit the gardens she helped plant, and Abigail Adams, wife of President John Adams, is known to do her laundry in the East Room.

The White House is not currently offering tours. 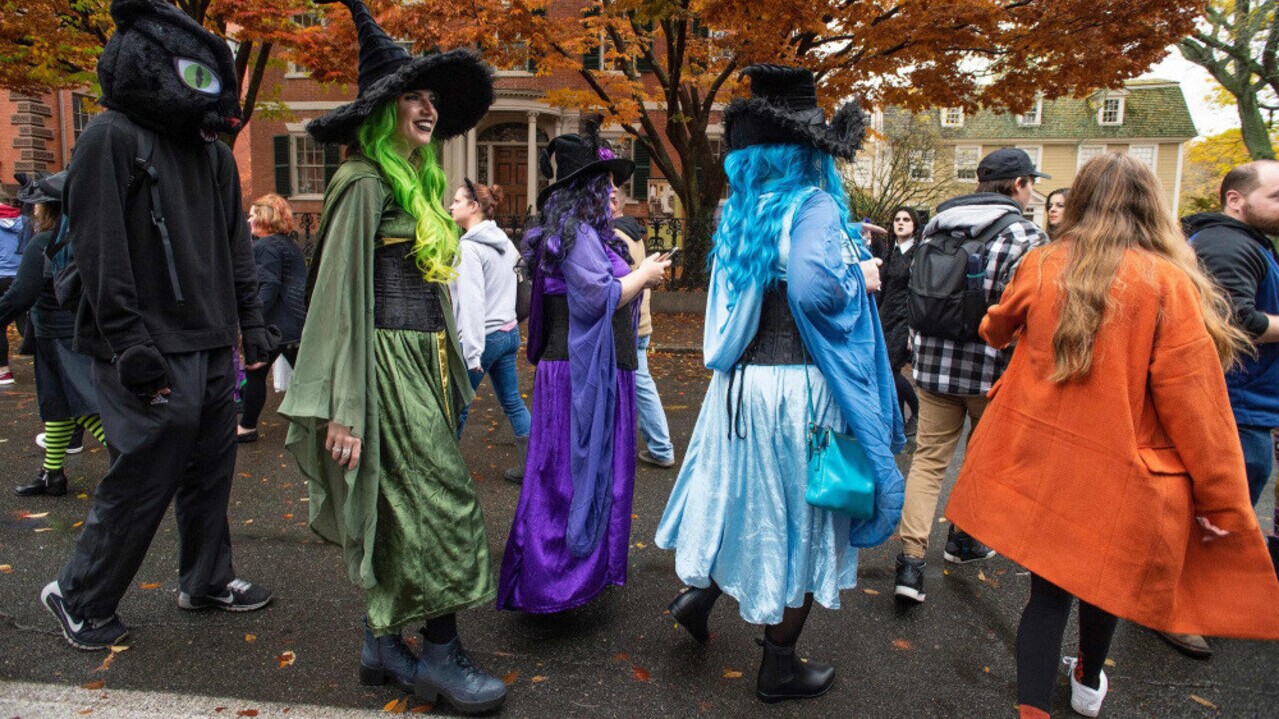 If you’re into ghost hunting shows, you probably already know this famous haunted house. This unassuming home in Kansas is rumored to be the dark lair for a demon who takes on the form of a little girl because of a family’s bizarre experiences there.

In the early ‘90s, new renters Debra and Tony Pickman claimed they saw strange occurrences in the house, including lights flickering, apparitions, possessions, unexplained voices, and strange scratches, marks, and burns on their bodies. These occurrences seem to have been the work of a ghost of a young girl, named Sallie. Former renters Bobby and Colleen Humbard and their daughter Heather also claimed to have seen or heard Sallie — whom Heather claimed was her imaginary friend.

But apparently, Sallie isn’t some harmless ghost. Theories around her malevolent presence in the house, as well as some evidence of Satanic rituals in the basement, suggest that Sallie is, in fact, a demon disguised as a young girl.

The house now offers self-guided tours, as well as special overnight visits, according to the house’s website.

This imposing Victorian house is considered to be the “most haunted house in Ohio,” and it’s easy to see why. It was built in the 1800s by Hannes Tiedemann, who was known around Cleveland to be cruel and abusive. When a string of mysterious deaths in Tiedemann’s family happened in the house, those rumors crystallized.

Among the many people who would suddenly lose their lives in the house were Emma, Tiedemann’s daughter, who apparently died due to complications with diabetes. Then, Teidemann’s mother and three more of his children died. Tiedemann's wife, Louise, also passed away, apparently due to liver failure, but many rumors circulated that Tiedemann was actually responsible. It’s also rumored that he murdered other members of his family, including his niece, a possible illegitimate daughter, and possibly his mistress. Tiedemann moved away from the house shortly after his wife’s death.

Since the tragedies, the house has passed from owner to owner — including a chapter of the German Socialist Party who remained there for 55 years. Locals heard rumors that the house was actually a den for Nazi spies. More recent investigations have found troubling evidence of foul play, including human bones within the walls.

The Franklin Castle is a private residence, so you can't tour it, but some ghost tours pass by the home to tell its spooky story. George Washington Vanderbilt II built this stately vacation home in the 1800s. Since then, it has gained a reputation for being one of the most haunted places in the state and the country.

While nothing completely nefarious seems to have happened on the estate, the home’s former owners seem to remain very active, even in the afterlife. After Vanderbilt died in 1914, his estate passed on to his children, who decided to open the home up to the public. That’s when the activity apparently began.

Visitors have claimed to hear a woman’s voice, possibly Vanderbilt’s wife, Edith, calling his name, and some say they've spotted some ghostly apparitions. The estate also features a number of hidden doors and passageways, adding to the home’s overall spook-factor.

Today, anyone can tour the estate either on their own or with a guide, according to the estate’s website. There are also winery tours and places to stay nearby if you’re hoping to get a nice, long trip out of it. However, there is no dedicated ghost tour.

Veteran and Military Predatory Lenders and How to Avoid Them

Price it right or die!

Veterans Housing Network is the only Veteran-to-Veteran Real Estate Referral Network that provides Veterans and Active Duty Personnel with the most effective and superior real estate experience tailored to the specific needs of the military community. VHN is committed to absolute integrity, excellence, and superiority, and is poised to address the diverse needs of the military communities real estate experiences.

PCS Moving Stress and How to Manage

Wow!  I know you must be thinking that I am a sage. Maybe clairvoyant.  How do I know that you get...

Veterans Housing Network is 100% Veteran-owned and operated, with 10% of profits going back to veteran charities.